An overhead power line is a structure used in electric power transmission and distribution to transmit electrical energy along large distances.

It consists of one or more conductors(commonly multiples of three) suspended by towers or poles. Since most of the insulation is provided by air, overhead power lines are generally the lowest-cost method of power transmission for large quantities of electric energy.

Towers for support of the lines are made of wood (as-grown or laminated), steel (either lattice structures or tubular poles), and occasionally reinforced wood. The bare wire conductors on the line are generally made of aluminum (either plain or reinforced with steel, or composite materials such as carbon and glass fiber), though some copper wires are used in medium-voltage distribution and low-voltage connections to customer premises.

A major goal of overhead power line design is to maintain adequate clearance between energized conductors and the ground so as to prevent dangerous contact with the line, and to provide reliable support for the conductors, resilient to storms, ice load, earthquakes and other potential causes of damage. 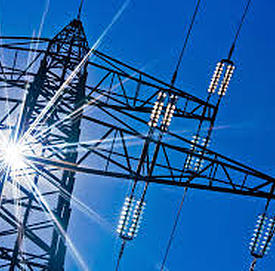 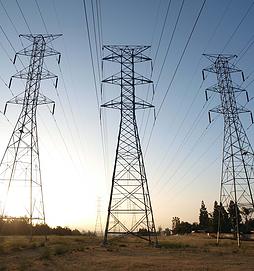 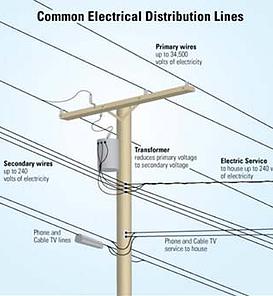 Today overhead lines are routinely operated at voltages exceeding 765,000 volts between conductors, with even higher voltages possible in some cases.

Overhead power transmission lines are classified in the electrical power industry by the range of voltages: