In an electric power system, switchgear is the combination of electrical disconnect switches, fuses or circuit breakers used to control, protect and isolate electrical equipment. Switchgear is used both to de-energize equipment to allow work to be done and to clear faults downstream. This type of equipment is directly linked to the reliability of the electricity supply.

The very earliest central power stations used simple open knife switch, mounted on insulating panels of marble or asbestos. Power levels and voltages rapidly escalated, making opening manually operated switches too dangerous for anything other than isolation of a de-energized circuit. Oil-filled equipment allowed arc energy to be contained and safely controlled. By the early 20th century, a switchgear line-up would be a metal-enclosed structure with electrically operated switching elements, using oil circuit breakers. Today, oil-filled equipment has largely been replaced by air-blast, vacuum, or SF6 equipment, allowing large currents and power levels to be safely controlled by automatic equipment.

High-voltage switchgear was invented at the end of the 19th century for operating motors and other electric machines. The technology has been improved over time and can now be used with voltages up to 1,100 kV.

Typically, switchgears in substations are located on both the high- and low-voltage sides of large power transformers. The switchgear on the low-voltage side of the transformers may be located in a building, with medium-voltage circuit breakers for distribution circuits, along with metering, control, and protection equipment. For industrial applications, a transformer and switchgear line-up may be combined in one housing, called a unitized substation (USS). 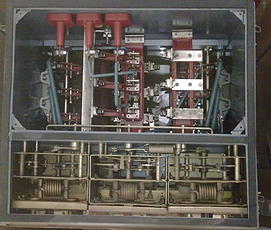 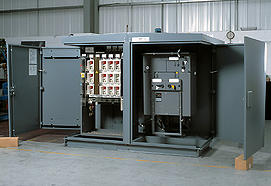 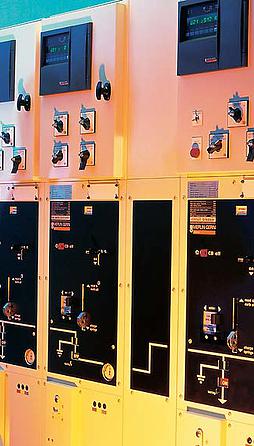